District Sonebhadra is one of the largest district of the Uttar Pradesh with the total geographical area of 680961 hectare out of which 79937 hectare is net sown area. The district is situated in south eastern part of the state. It lies between 23.520 to 25.320 northern latitude and between 82.720 to 83.330 eastern longitude. The district is surrounded by district Chandauli, Varanasi part of Mirzapur district in north and bordered by state of Madhya Pradesh and Chattisgarh in the south, state of Bihar, Jharkhand and part of Chattisgarh are in the east, while state of Madhya Pradesh is in the west.

The district consists of three sub division (Tehsil) and 8 blocks with headquarter at Robertsganj. There are 67 Nayaya Panchyat, 501 Gram panchayat and 1443 revenue village in the district.

The district is characterized by warm and humid climate from June to September and dry and cool weather from October to February-March. April to June are characterized by hot winds. The mean maximum & minimum temperature recorded in the past are 45.80c and 2.80c respectively. The average rainfall received in the district in last five year was much below from the normal average of 997mm.

The major cropping system of the district is Rice-Wheat. The major crops of the district are Paddy, Wheat, Arhar, Gram, Lentil, Lineseed, Sesamum, Pea and Vegetables like Tomato, Brinjal, Chilli, Cucurbits and broad beans. The cattle breeds are mostly non-descriptive with low milk productivity. Goat & sheep are other domestic animals dominant in district. The lack of irrigation facilities is one of the major factors affecting production and productivity of crops in this district. Major source of irrigation is canal supplying water from the reservoirs after storing rain water. This water is not sufficient for providing irrigation to Kharif and Rabi season crops. Management of red, black soils with shallow depth and rocky nature located in undulated terrain is another problem of the district. 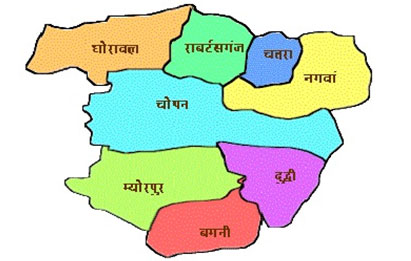 
Area, Production and Productivity of major crops cultivated in the district


Production and productivity of livestock, Poultry, Fisheries etc. in the district


Production and productivity of livestock, Poultry, Fisheries etc. in the district